Most convection steamer models will heat the water using gas, with gas commercial steamer units available that take natural gas. Convection steamers are available in both floor-standing and countertop steamer models. The latter typically cost less, but the capacity of a single floor standing model will typically be higher. Pan capacity varies from one restaurant steamer model to another, with large units accepting as many as 32 pans. From two of our most popular manufacturers.

True convection commercial steam cooker models will provide that convection one of two ways, in addition to the natural movement of the steam through the chamber: by using the condensate drain to create a vacuum in the chamber. The first of those is fairly self-explanatory, but the second is a bit more complicated. It involves using the water used to cool the condensed steam in the drain to create a vacuum that moves the air inside the cabinet. That can promote faster and more even cooking. 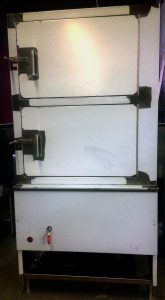